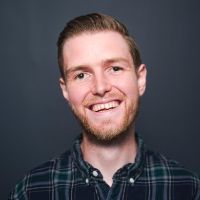 Why do you behave the way you do? It’s a simple enough question, but one that most people are unsure how to answer. We’d all like to think our decisions are the product of rational, considered thought but, rather unsettlingly, that’s simply not true.

It might surprise you to know that the neocortex — the part of our brains responsible for conscious thought and rationalisation— isn’t in the driving seat for any of our decisions. Instead, a little thing called the limbic system governs all of our decisions, behaviour, and actions.

What is the Limbic System?

In distinctly non-scientific terms: the limbic system is the set of structures deep within our brain — immediately beneath the cerebrum in case you were wondering — that houses much of our subconscious mind. The limbic system is responsible for our emotional life and instincts, it may even be integral to the way we form long-term memories.

The subconscious activity within the limbic system drives all of our decisions and behaviour, including who and what we’re drawn towards. This part of our brain makes decisions in a fraction of a second, long before our conscious brain has time to react.

This ability to process information and reach a decision lightning fast was vital to our ancestors in surviving a world teeming with potential dangers. For Anthropocene man, it means we have very little conscious awareness of the decisions we make or why we make them — the best we can do is try to rationalise them after the event.

So far, so interesting, but how is this useful? Well, the key lies in something called limbic mapping.

Neuroscientists discovered that when subjects are exposed to media that elicits an emotional response (poetry, images, music, film etc) while inside a fMRI scanner, it’s possible to map which areas of the limbic system 'light up' when specific emotions are experienced. From this, they’ve been able to discover that each human emotion has its own ‘home’ in our brains. So, envy, for example, will light up the same area of the limbic system for all of us.

Using this information, neuroscientists have created a limbic map which looks like this 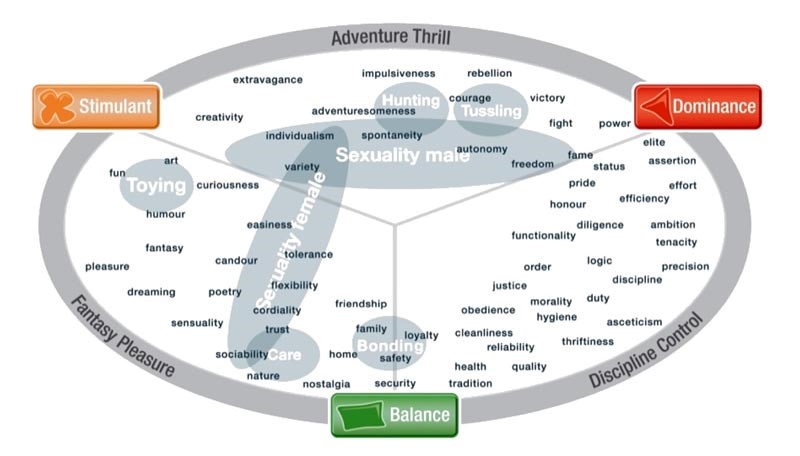 As the image above, popularised by German neuroscientist Dr Georg Häusel, shows the limbic map is divided into 3 core areas:

Stimulant: the area dedicated to gratification and pleasure.

Dominance: the section where discipline and control reign supreme.

Balance: where our more temperate emotions relating to stability and security are housed.

This is by no means an exhaustive survey of human emotion — we’re capable of thousands more subtle emotions, many of which defy easy categorisation (ponder on where you’d put schadenfreude). However, it does give you an idea of the ‘implicit’ drivers behind our decisions and preferences.

How Does Any of This Relate to Marketing?

You could be forgiven for wondering at this point what any of this has to do with marketing.

Well, it’s quite simple: good marketing should seek to tap into these ‘implicit’ motivations. This means going further than the time-honoured marketing maxim ‘put yourself in the prospect’s shoes’ and moving beyond the obvious.

The prospect may well be interested in your software because they need it, if they plump for yours over your competitors', the reason is likely about something more primal.

Perhaps your prospect considers themselves an early adopter and always one step ahead of ‘the sheep’ when it comes to the latest trends, in which case, you may find that pride and status are the subconscious forces driving them. Equally, it might be that your prospect is interested in high-quality or well-established brands, so you’re likely to find the emotions behind their decisions are more balance-based, favouring security and loyalty over fiercer emotional drivers such as pleasure or power.

In both cases, you’ve discovered a potential ‘in’ for your copy and marketing. By targeting implicit motivations for using your product or service, you tap into what your target audience really wants, long before the rational mind has even started clanking into first gear.

How Does It Work in Practice?

What’s more, it really works. One of the best examples of it in practice is an experiment run by SEO sage Danny Richman. Calling the approach Emotional Goal Optimisation and using dummy Google AdWords campaigns, Danny demonstrated how tweaking copy to speak to prospect’s implicit motivations can make a huge difference to the ad’s success.

For example, a Google AdWords ad for an apple tart recipe that read:

“How to make an apple tart

A great recipe for beginners

Learn how to make an apple tart with this classic recipe.”

They will love you for this

Feel proud hearing the compliments with this easy and delicious tart recipe.”

According to Danny when he ran the original ad it generated a click-through rate (CTR) of 9.16%, which isn’t bad, but hardly a revelation. What’s really interesting is that when he ran the second ad, the CTR jumped to 14.6% — an improvement of 59% of the original figure.

Why did this happen? Both ads promise the same thing (that you’ll learn how to make an apple tart and it’ll be easy), so you’d expect the CTR to be roughly the same, right?

Well, actually no. The latter ad digs much further into the emotional  benefits of the prospect using this recipe to bake their tart. Rather than simply stopping at “this recipe is easy to follow, and the tart will be tasty”, it appeals to our innate desire for the admiration, love and respect of our friends and family —something we all secretly hope will be the by-product of our baking but are unlikely to admit is driving us.

As a result, it speaks to the prospect on a level that the first ad never gets near: an appeal to the subconscious rather than the rational mind.

Danny goes on to show how this approach could be applied to anything from perfume (appealing to our desire to be sexually attractive) to PowerPoint templates (our desire for status and the admiration of our peers). But can it be applied to a B2B audience?

Our B2C cousins have long-recognised the power of appealing to implicit motivations, think ads like John Caples’ classic and progenitor of viral content headlines: “they laughed at me when I sat down at the piano — but when I started to play!”, printed in 1926. Or, even something more contemporary like Apple’s famous “1,000 songs in your pocket” effort from 2001.

However, the same can’t always be said of B2B: too often B2B content ends up focusing upon features over emotional benefits. Why is hard to pin down. Is it that we feel it’s somehow unprofessional to appeal to a prospect’s baser instincts in a business setting? Is it that we believe peoples’ brain structure changes at work? Is it down to client pressure to include as many points as possible about what the product does rather than what it does for  the customer?

In truth, it’s probably a combination of all three, but it doesn’t have to be this way. The best B2B copy—whether for an ad, web page, headline, call to action or landing page— understands that even though the prospect might be wearing a suit, the way their brain works doesn’t change.

The maxim “people don’t buy products, they buy better versions of themselves” applies just as much to a B2B prospect as it does in the consumer-facing sphere. In short, you’re still appealing to a person, who wants to be admired by their colleagues, make their job easier or save money.

One business that does this really well is Github: 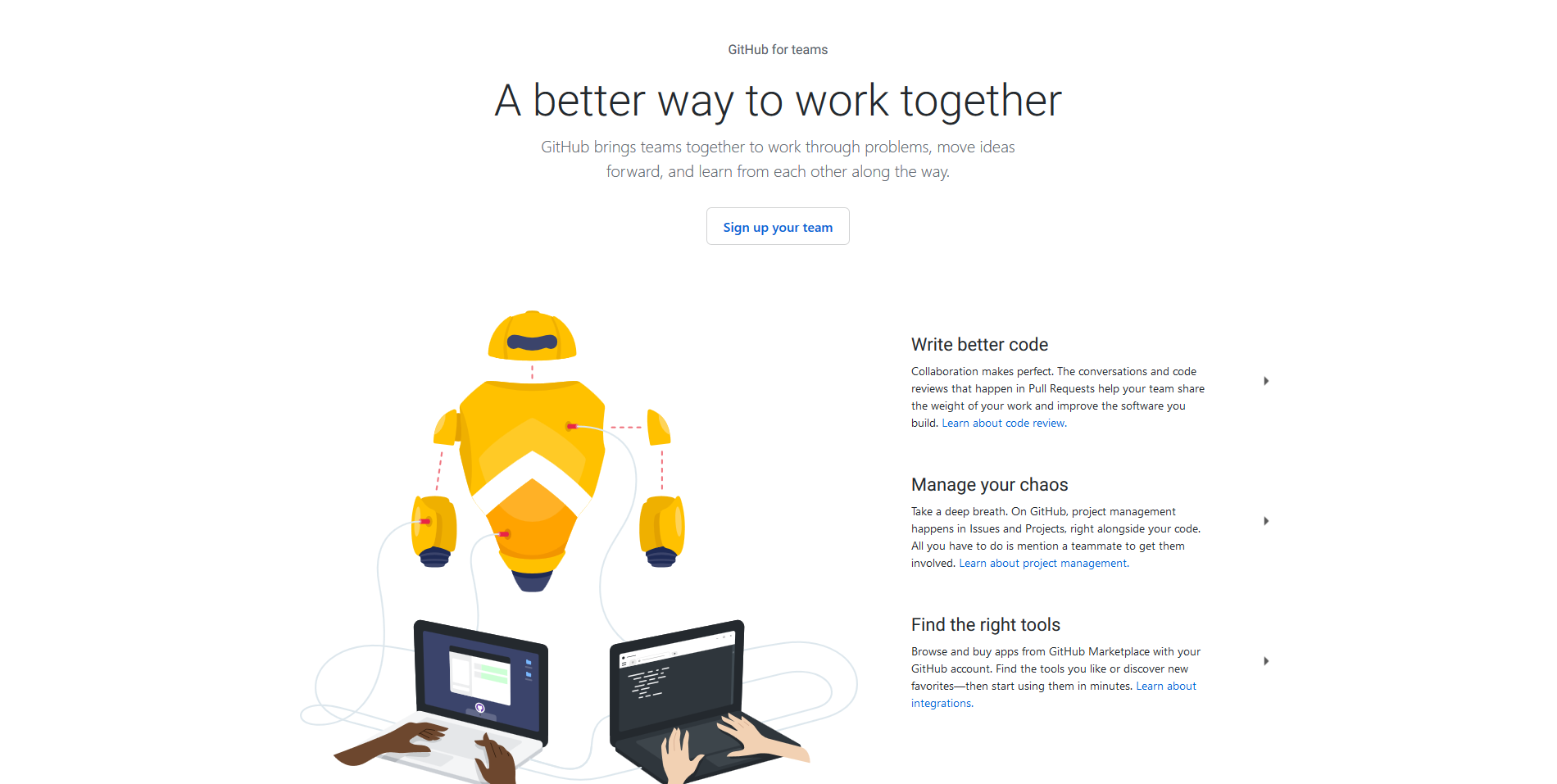 Notice how virtually none of the copy on this introductory page is about the features, in fact, even the tagline doesn’t include any. Instead, they focus on the emotional benefits of using their software: feeling more connected with your colleagues and the respect and status being better at your job confers on you.

Another great example is Loop54. 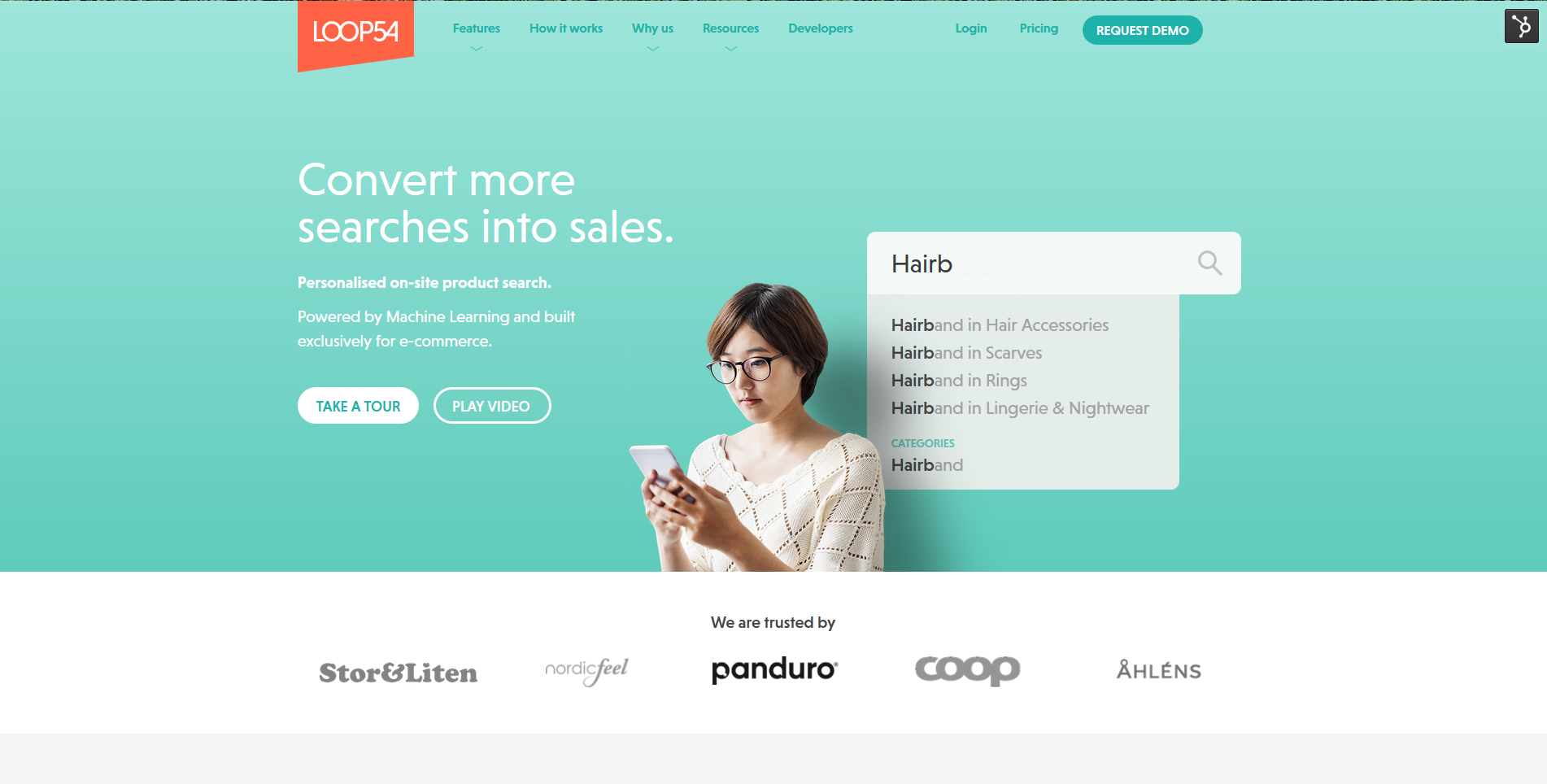 Again, the headline says nothing about the product or its features. Instead, they focus upon the target audience’s — e-commerce retailers — implicit motivation to make more money and gain the security and status that comes with that. In Loop54’s case, they’ve avoided the temptation to go ‘feature heavy’ despite the complexity of their product. In doing so and focusing on ‘what our product can do for you’ rather than ‘what our product does’, they’ve managed to tap into what it is their customers are actually looking for.

B2B Marketing has become ever more data-driven and scientific in the past decade, particularly within the tech sphere, and while this is undoubtedly a good thing, perhaps we’re a little guilty of forgetting about the humans we’re trying to engage with.

Every one of your target audience is a father, mother, sister, brother, son or daughter, with their own implicit and very human motivations for doing everything. Applying limbic mapping and targeting your prospects' emotional goals gives you a way to connect with them on the most human of levels.

Whether you’re penning a blog, landing page, web page or call to action, asking yourself what your target audience really  wants and tailoring your copy accordingly can be the difference between content that captures and content that falls flat. To learn more about creating B2B content that really speaks to your prospects, download our guide.